A song which is a light-hearted entertainment.

In my youth I was unconvinced when adults proposed “older and wiser” as an absolute truth to me.  When I looked at the senior people in the world around me, I felt  that there were many exceptions that tested this rule.

In this song, Georges Brassens humorously dismisses the two opposing cases based on the idea of the automatic correlation of wisdom and age.

As a device to enliven his argument he uses one certain rude word with remarkable frequency.

1)      Con - This is a word that recurs very often in this song.  Both French and English have a monosyllabic word beginning with “c” to designate vulgarly the female genitals.  In both countries  this word is also used to refer to a fellow human being insultingly.
Nevertheless, It is a mistake for translators to assume that the word “con” in the French text can be automatically replaced by “cunt” in the English translation.  In the cultures of the two countries, the words have different usages and also a dfferent status.

French Wikipedia clearly explains the French usage of “con”.  it tells us that the adjective “con” describes some-one who is stupid, naïve or unpleasant.  These same characteristics  are expressed in derivatives of the word.  For example, the word “connerie” describes a stupid mistake or stupidity in general.

The word “con” can have a somewhat relaxed status and can sometimes be used humorously in everyday society, especially in the South of France. We can see that, perhaps typically, the southerner, Georges Brassens, freely bats the word around like a ping pong ball in this song.

While the essential meaning of “con” is stupidity,  this is not true of the English usage of the word “cunt”.  Its basic meaning is a very unlikeable person.  This person is not necessarily stupid and if you wish to include this defect, you have to add an adjective and say:  “He (or she) is a stupid cunt”.

The word “cunt” has a much more offensive status than the french "con"., perhaps due to its aggressive application. It should not therefore be used flippantly in normal everyday society.  When talking about sex light-heartedly in more polite society a gentler , nicer sounding, popular word is used - for example "fanny".

Translators who use the word “cunt”in their English version of “Le temps ne fait rien à l’affaire” will find the basic meaning of the song  gets confused.  it is about getting wiser not getting nicer.

A photo that accompanies the Wikipedia article shows the relaxed attitude to the word in France.  The caption explains that some people enjoy the game of changing a poster or road sign to obtain the word “con”. 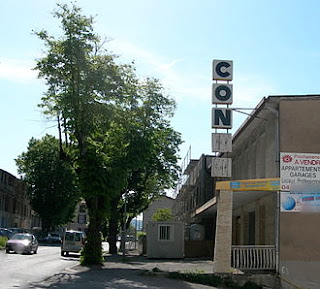 I am conscious that, in my translation, I have given no indication of the provocative game that Brassens was playing in composing this song. He was seeing how many times he could use the word “con” in these few lines.