We know the name and location of the bistro that Brassens describes in this song.  It is called "Aux Sportifs Réunis" and it is situated opposite the "parc Georges Brassens" (Paris 15e)  Below is a photo: 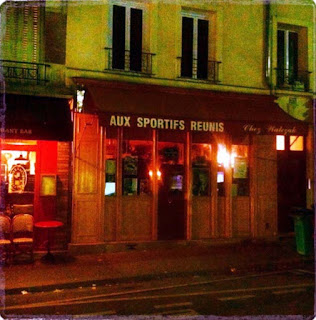 It was owned by  Yanek (Jean) Walczak. He was originally a miner and took up boxing in his youth.  During the Occupation, he won the title of amateur light-weight champion.  He became a professional boxer in 1947 and the peak of his achievement was winning was winning the welter-weight championship of France. He fought the best in the world. In 1948, he fought his friend the legendary Marcel  Cerdan for the French Middle weight title but was knocked out.  He had fights in the U.S. and fought the greatest boxer in the world, Sugar Ray Robinson three times in 1950-1951.

After Robinson knocked him out in June 1951 Walczak retired from the ring and opened his restaurant in Paris. It was a place where he could meet up with his friends locally. The bistrot was frequented by famous personalities, including Edith Piaf and Georges Brassens, who lived close by in this unfashionable quarter.  His son tells us that his father was a well-liked host, who always enjoyed a good laugh.

It is said that Brassens was no longer welcome at "Aux Sportifs Réunis" after publishing "Le bistrot" in 1960, but that is perhaps only the natural conclusion that anyone would make after hearing the song.  This may not be true, however, and evidence will be provided later in this post.


1)   Although in English, we pronounce Paris with the final "s" sounded, we also talk of "Gay Paree". I wondered if using it here helped the emphasis on a different face of Paris than we usually see.

(3) marmiteux - My French dictionary tells me that this adjective means: looking old - in a bad state

(5) fée - As well as fairy, this can mean; enchantress, siren, magician.

DID THIS SONG LEAD TO A QUARREL BETWEEN JEAN WALCZAC AND BRASSENS?

A later photograph shows Brassens and Walczac sitting happily together at the restaurant of Pierre Vedel. Walczack is sitting to the right of  Brassens.  In spite of the latter's insults, it might seem that the former boxer's face is quite presentable and he is not too overweight.  Probably the song would have been acceptable in their group as it was recognised as massive exaggeration intended to provoke but not too seriously- which Brassens often enjoyed doing. 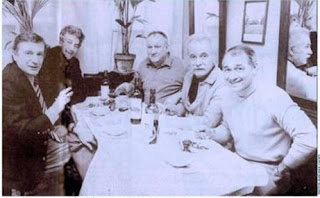 Walczack's son now runs the business, whose restaurant he now calls "Chez Walczac".  However he has ensured that "Aux Sportifs Réunis"  lives on, to sustain nostalgic memories of the Brassens era.  All this is advertised on the Internet at:


Pleaseclick here to return to the alphabetical list of my Brassens selection
Posted by David Yendley at 16:12