Although on a subject very serious to Brassens, this song has a light-hearted tone with some quaint detail- e.g. the girls’ corns.
Coming from a humble background, Brassens always took the part of the poor and oppressed and resented the richer classes that had the power to control the rest.  One group of the underprivileged, which he defended in a number of his songs, was that of the girls and women who made a living by prostitution.


In this “Lament of a prostitute”, the “filles de joie” are presented as victims of this class conflict.  Brassens, as always, is angered by the hypocrisy of the upper classes that denigrate street girls, while many men from their supposedly morally superior ranks secretly use their services.  In this song, however, Brassens is amused by the irony of the merging of the classes as a result of these brief “marriages”.  He believes that these liaisons secretly make intimate relatives of the street girls and the snobbish kids who mock them.

TRANSLATION NOTES
1)     ces vaches de bourgeois – Vache is used like the noun « cow » in English as an unpleasant word of abuse and a worthless person perhaps fat and and ugly.  The word “cow” has no adjectival usage, but the French word “vache” does have.  When  “vache” is used as an adjective, it tells us that some-one is mean and unkind.  Examples in the French dictionary are: “Pas la peine d’être vache avec moi” translated as “You don’t have to be mean with me” or “l’amour vache” translated as “tough love”.  I was originally going to bring out the cruelty in the character failings of this couple,  but it is their stupidity that Brassens talks of towards the end of the poem and so I accentuate that.
2)     Filles de joie – I keep this in my translation, because outside France it is a term well-known for “prostitute” in a French context.  Also I need a term referring to joy as the next line says that the girl themselves did not have much fun.
3)     grues  - Grue has 3 meanings:
·       A crane- the construction device for lifting weights–not applicable, of course, here
·       A crane-  the long legged bird. (See picture below)The image may be of street girls showing of their legs, the height of which is accentuated by high heels. 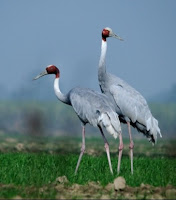 ·       A slang word for tart/prostitute.
There is an expression in familiar speech: “faire le pied de grue”, which, thinking about the crane bird’s movements, means flitting about the place. Brassens may also be making a combined play on words to say these restless feet are the feet of prostitutes. These different shades of meaning would seem difficult to convey in translation
4) les guibolles is the slang word for « legs” like the English slang version: “pins.”
5) grolles is a word used in dialects for “shoes”
6) qu'ell's les volent-  voler means to steal but as in English it is used for not to give value for money  e.g on n’est pas volé = you get your money’s worth all right.
7)  C’est pas pour ma fiole  - This is an idiom which means “It is not for me”
8) pécore – Originally this word meant the little animal in a flock. This meaning is no longer used       and “pécore” is used exclusively as an insult to say that someone is silly and stupid e.g. Taisez-vous, petite pécore.  In this penultimate verse, Brassens is referring back to the middle class pair whom he addressed so contemptuously in the first verse.
9) Minus = This term is used to describe some-one who is incapable and unintelligent .
10)  vieille casserole -  Une casserole is a saucepan, an everyday domestic item.  However, perhaps because a standard practical joke is to secretly tie a pan to the back of a car etc to embarrass the occupants, it is used in French for a major scandal or embarrassment e.g.  - traîner une casserole = have something to hide.
In the French dictionary, I found the following example of the word's usage:
« s'il faut traîner des casseroles alors tous peuvent reprendre les anciennes casseroles et les faire traîner à nouveau”, which translates as:
«  if we must be haunted by a scandal - then all of us can drag up past scandals all over again.”
This is the meaning that I have preferred but other translators stick more closely with the word "saucepan" and see it as an insult for  a woman as a mere receptacle, perhaps more particularly apt for a prostitute.
11)  Il s'en fallait de peu, mon cher, que cett' putain ne fût ta mère.  This line puzzles me. If the father of the middle class young man whom Brassens is addressing had had sex outside his marriage, the son cold have been close to having a different belle-mère/stepmother  There is little danger of mothers being wrongly attributed as fathers traditionally are.  The Ancient Greek poet, Homer had the line “…they tell me that I am the son of Odysseus, but it is a wise child that knows his own father.  Shakespeare had the line in the Merchant of Venice Act 2 Scene 2:It is a wise father that knows his on child.”  Even in this age of gender equality, it is difficult to adapt it to “It is a wise child who knows its own mother”, as Brassens seems to imply.
Posted by David Yendley at 17:18